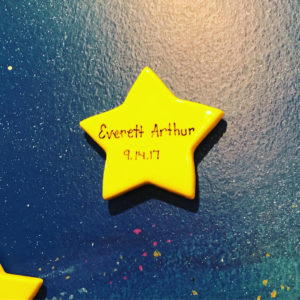 More than 100 local families have chosen to donate milk after loss. Over 40 of these families attended the unveiling event; with nearly half traveling many hours from throughout Illinois and Wisconsin – a true testament to the importance of this program. The common sentiment repeated by bereavement donors is that milk donation is a gift; not just for the recipients of the milk, but for the donating families as well. 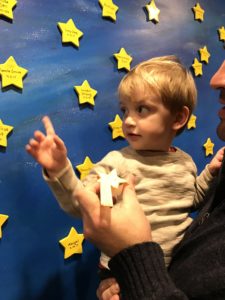 Everett’s mom, Kate, was a second-time mom who described the ache of wanting to nurse her son as an unquenchable need that milk donation helped soothe. When she left the hospital with empty arms, she knew exactly what she was missing – and that her body wouldn’t get the memo that her baby did not survive. She made the choice to pump for donation, stocking her freezer with milk just as she had planned to do for her son. “Donating milk was such a healing process for me, and the [unveiling] event allowed my [older] son and husband to be part of that healing, too. I can’t stop thinking about how much positivity this experience could offer fellow loss moms. I know in my case, everyone at [the hospital] seemed kind of afraid to say anything to me about my milk, other than how to dry up. I knew right away I wanted to donate.” Delivering the milk was a defining moment in Kate’s path to healing after losing her son. She explained that milk donation was one of the best things she has done with her life. She takes great comfort in knowing her son’s life goes on through the families he helped, and the star that hangs with his name at Milk Bank WGL.

06/30/2020 UPDATE: Over the summer of 2019, the Poppy’s Dream bereavement memorial tripled in size, and moved to the Milk Bank WGL Education & Outreach Center. The new site has a much larger gathering area to accommodate the growing program. On February 1, 2020, nearly 200 people attended the annual candle lighting ceremony. There are now over 250 stars in the Poppy’s Dream sky, each holding space for a beloved baby gone too soon.

05/25/2021 UPDATE: Shortly after the 2020 event, which was held in person, the COVID pandemic forced us to make some temporary changes to the program. Our 2021 event was held in the form of a virtual video, which was lovingly produced by Kate and her team at SRW Chicago. There are now more than 350 stars. We hope to be able to host an in-person community event again in 2022, but in the meantime, we continue to offer private star placement ceremonies for each participating family. 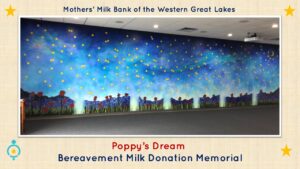