Giving Back – from Recipient to Donor

I am a proud aunt to five extraordinary nieces and nephews and I have been an elementary school teacher for 14 years. It’s safe to say that kids play a huge role in my life. From early on in our relationship, my husband, Brian, and I prayed that we would have children of our own someday.  We were blessed with two pregnancies in 2018. Unfortunately, we had a miscarriage with our first pregnancy and an ectopic pregnancy with our second; we were completely devastated. Even so, we didn’t give up hope. Thankfully, our prayers were answered once again when we found out we were expecting a few months later! We were ecstatic, albeit scared.

This pregnancy, however, was picture perfect—no morning sickness, no aches or pains, no mood swings, healthy check-ups, promising ultrasounds and lots of baby kicks! At every single doctor appointment I was told that I was carrying a very strong, healthy and active baby.  With each successful visit, we breathed a bit easier knowing that our Little Love would be in our arms soon.

In early May, my due date came and went and I was still feeling great. I had another check-up a couple of days later and they decided to induce because the baby was plenty big, I was past 40 weeks and COVID-19 was making things a bit more complicated in the hospital with staffing. I was induced a couple of hours later. After 20 hours of labor, it was determined that our baby was much too cozy inside and the doctors needed to perform a cesarean to keep everyone safe. I was prepped for surgery and shortly after, I gave birth to the most beautiful little boy we’ve ever seen! 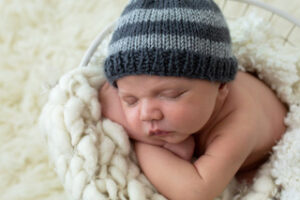 Clayton stole our hearts instantly! He weighed in at a very hearty nine pounds and eight ounces, his color was excellent, his crying was on cue and his Apgar scores were eight and nine—practically perfect! My husband and I were in complete awe and we soaked up endless snuggles as our new family of three.

Upon being transferred to our Family Care Suite, both Brian and I noticed that when Clayton was in his bassinet, it seemed to be vibrating from his breathing, but we thought that must be normal since everything had checked out flawlessly just moments ago. We were going to ask the pediatrician about it when she came up to our suite for rounds in a little while. A few minutes later, however, a nurse came into our room to deliver flowers and she instantly noticed Clayton’s rapid breathing. Within seconds, the pediatrician was called to our room to evaluate our baby. 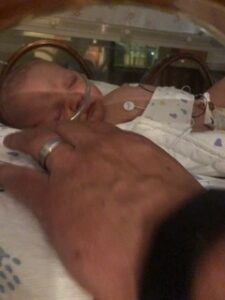 The pediatrician reassessed Clayton’s breathing and his oxygen levels—both were now at dangerous levels. She wanted to do more assessments in the NICU, so Brian quickly went with Clayton and the doctor; I had to stay behind in the room because I was still completely numb from the epidural from my C-section. So there I was, all alone (visitors weren’t allowed in the hospital due to the pandemic), praying for everything to be alright. That moment was truly the most helpless I’ve ever felt in my entire life.

After what seemed to be an eternity, the pediatrician, my husband and Clayton returned to the room, so I could see him for a brief moment before he was swept away and admitted into the NICU. My heart instantly sank. All I could think was, “Nine-and-a-half pound babies don’t belong in the NICU. We’ve made it this far, please let him be ok!” 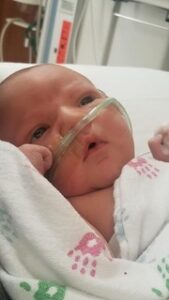 As soon as possible, Brian and I went down to the NICU. It was heart wrenching to see Clayton hooked up to so many tubes, wires and monitors while resting inside his incubator. Doctors determined that Clayton had a severe infection, but the cause was unknown. My eyes welled up just looking at him in this condition. We were able to hold him, but the doctors told me I wouldn’t be able to breastfeed until his breathing was under control; the risk of him aspirating was much too great. Clayton was already hooked up to a gavage (feeding) tube and he was receiving substantial amounts of donor milk to help flush the intense levels of antibiotics through his system.

Once again, my heart sank. Every ounce of me wanted to be able to feed my son myself; however the quantity of breast milk that he needed was much greater than what I was able to produce from the get-go. Even so, the nurses encouraged me to pump as much as possible so they could supplement anything I pumped with the donor milk. By the eighth day, I was producing enough milk on my own to keep up with Clayton’s needs. Miraculously, that was the same day we were able to bring Clayton home from the NICU. It was truly a day of celebration! 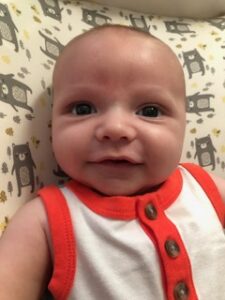 Throughout our stay at the hospital, Brian and I were looking for ways to give back; the three of us had just received the greatest care, we needed to do something. Breast milk donation was the very first thing that came to my mind—after all, donor breast milk helped save our son. I inquired with the NICU nursing staff at St. Mary’s in Madison about becoming a donor and they provided me with contact information for Mothers’ Milk Bank of Western Great Lakes.

Within a couple of weeks of my first contact with Mothers’ Milk Bank WGL, I was approved as a breast milk donor. I couldn’t send off my first shipment fast enough! I had been waiting for this moment since our hospital stay. Finally, we had our chance to give back in a true, full-circle donation! With each shipment of liquid gold, I know I’m helping save tiny humans; and it’s a phenomenal feeling, especially since someone did the same for our tiny human—our Clayton. 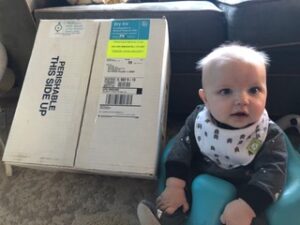 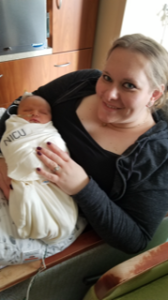